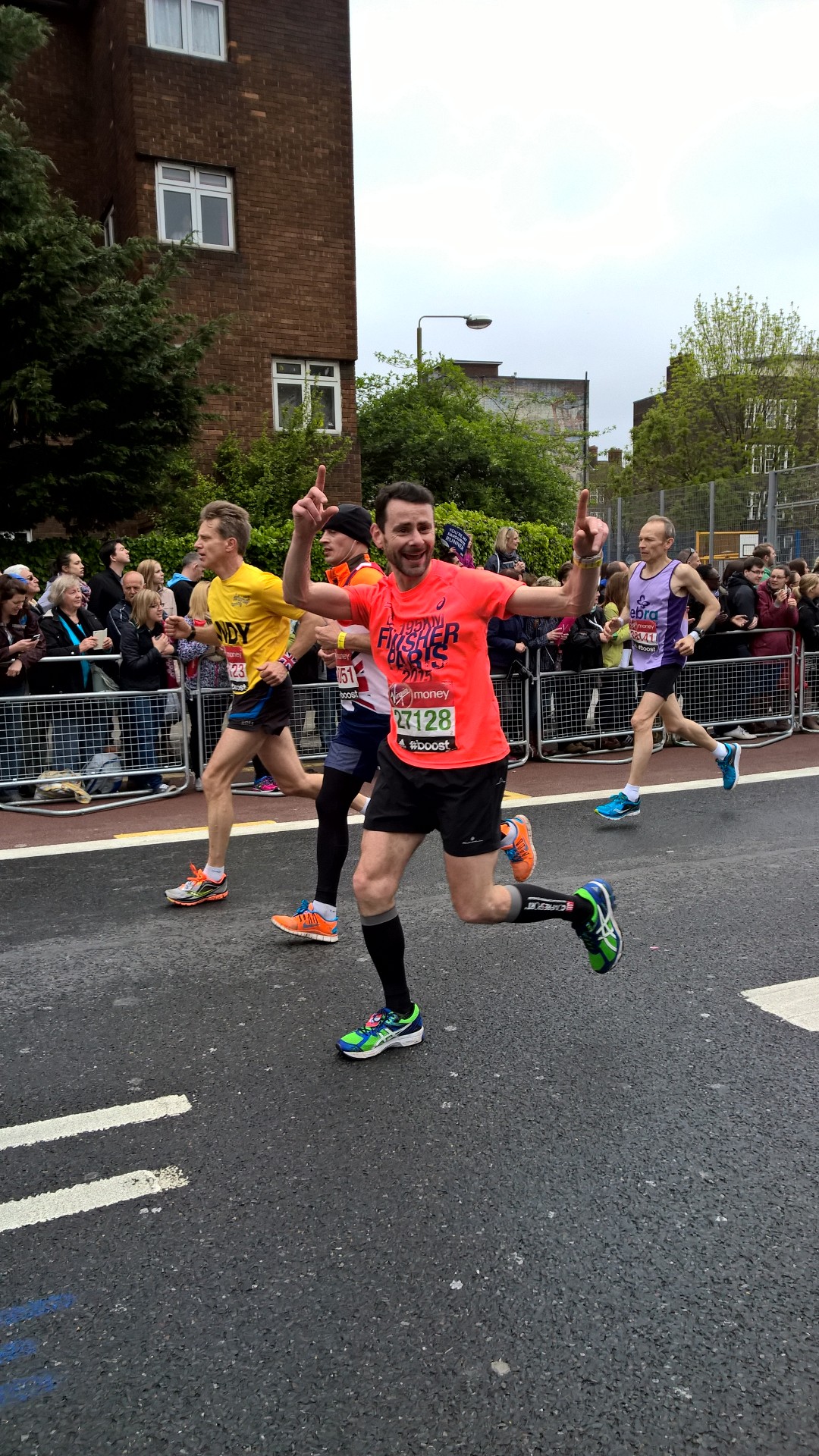 I never intended to go this journey. It was meant to start and end with New York. My first marathon; at the time, I thought it may be my last. How wrong could I have been?

Back in 2007, spurred on by a desire to be fitter, I started running. I was entering the tail end of my thirties and harboured a desire to attempt a physical challenge before turning 40. But I was also heavily motivated by the memory of my father. He was taken from me suddenly following a heart attack when I was 10. The idea of running a marathon began to take seed. As my haphazard and somewhat irregular running developed, so did the thought of taking on the 26.2-mile challenge. I signed up to run the New York marathon for the British Heart Foundation.

In what seemed like an instant we were on the plane to JFK. We decided to take a family mini-break; I just happened to be going for a small run in the middle of it. These days, my ever-supportive family is quite used to these trips. I am often told: “Dad, you don’t have to run a race when we go away.”

But back then I had diligently followed a 16-week novice training plan, which had progressed well until about four weeks before the race, when I had my first experience of ITB syndrome. I had never heard of it and panicked, thinking I had the worst running injury ever. I rested and researched and stressed about it and tried everything to fix it. This included the most painful sports massage ever, delivered by a personal trainer who happened to be an ex-marine. There was a smile on his face and tears rolling down mine.

The marathon was an amazing experience…

Well, most of it. Maybe the 3am wake-up to catch the bus to the start and then nervously sitting in the cold and dark for what seemed like an eternity weren’t particularly amazing. There was so much to soak in: the enthusiastic crowds, the bands along the route, the people cheering my name and the magnificent and towering sights of New York itself. All this while trying to manage my pace and ITB and look out for the family at the British Heart Foundation supporters’ point. (I saw them just after the euphoria of turning on to First Avenue and being welcomed by a wall of noise.)

The ITB didn’t flare up until halfway round, after which I faced a painful determined struggle to reach the finish. But reach the finish I did. I had intended to run sub-4, but in the end managed 4h15m. I did not care after my injury. Post-race I was a cauldron of emotions; thoughts of my dad mixed with joy, relief and pride at what I had achieved.

I say now that I knew straight-away that I wanted to run another marathon, but this is not entirely accurate.  While slowly and painfully walking the several blocks back to our hotel, running was the last thing on my mind. But over the next few days I knew I had to run another one. I wanted to run injury-free and see how fast I could go. So on my return to the UK I started plotting my next marathon adventure. After injury setbacks this resulted in heading out to Berlin, again with the family in tow. Training had gone well and with it being nearly three years after New York I felt I was a far more experienced runner, although I was still a marathon novice. But running without injury meant I smashed my time by nearly 45 minutes. Marathon world records are broken over the flat course of Berlin and I had managed to set my own personal best.

Following my success in Berlin the idea of completing all five major marathons really began to take hold. But could I really do it? London wouldn’t be a problem as far as travel was concerned, but completing the challenge would means trips to Chicago and Boston. Not only did I have to consider the expense but the bigger issue of actually obtaining the qualifying time for the Boston race – I was 20 minutes away from that target. But I thought if I completed the other marathons first, I may be able to keep improving and obtain a Boston qualifying time.

So next it was Chicago and I set off aiming to see if I could get anywhere near Boston pace. Deep down I thought it may just be a bit too much to achieve but surprisingly, after three-quarters of the race, I was on schedule. As I entered the later painful miles the weather had seriously warmed up and it was becoming a struggle to maintain the pace. I crossed the line with another PB, though, and – more incredibly – a qualifying time for Boston. Get in! In only my third marathon I had gone more than an hour quicker than my first: 3h11m. I was even beginning to think of that magical sub 3-hour race. We can all dream…although it did seem as if my aim of completing the big five races was realistic.

For a few weeks, anyway. Not long after Chicago it was announced that a sixth marathon was being added to the majors schedule…and where was this one going to be staged? In bloody Tokyo!

Not put off by the expense of a trip to the land of the rising sun, I determinedly continued my quest. In 2013 I ran my home marathon in London. However, the Boston bombings six days previously had shocked both the running community and the world. I stood at the start united in defiance with the other thousands of runners observing the minutes silence to remember those in Boston. It was a moving, powerful and emotional experience and put my own ambitions into perspective. On the day, the later start time and hotter conditions meant I came in slower than in Chicago. A running friend had told me to enjoy running down Pall Mall and soak it all in as it was a brilliant experience. Well, I ran down there dead on my feet with the finish line seeming like it was still another mile away! It felt like my first setback in marathon running and it hurt as I wanted to keep improving. I must have been in fantasy land thinking of a sub-3 hour marathon.

After London my attention quickly turned to obtaining my place in Boston for 2014. I submitted my application but over the coming weeks it became clear that the process was going to be very different following the bombings. The main consequence was that there would be fewer places available and those places would go to the quickest first. This cast a big doubt in my head; I was sure there would be many quicker runners in my age group. I spent many tormented hours reading updates and articles about how the places were being allocated; at times I felt encouraged yet on other occasions finding out new information made me feel as if I had more chance of getting to the moon. In September 2013 I ran the Robin Hood Marathon in Nottingham, spurred on by my disappointing performance in London and a motivation to try and improve my chances for Boston. I ran my quickest ever marathon, beating my previous best by almost a minute. A marginal improvement it may have been, but it felt good and faintly reignited those sub-3 hour thoughts!

I wasn’t sure whether my Nottingham time made any difference but I sent it to the Boston race organisers anyway. Weeks later and it was notification time. We had gone out for a family meal and I was checking my phone when I saw I had received an email from the race organisers. Should I read it or wait until we get back home? What if I’ve not got in? How am I going to react? I didn’t want to go and sit and sulk in the car. Well, I had to read it to myself there and then. I quietly put away my phone and a big smile emerged on my face.

So… a family trip out to Boston in 2014 and an incredibly moving experience being part of the city one year on from the bombings. The whole city rose with defiance and I felt a real sense of pride to be a part of the event. Big screens showed us President Obama’s speech at a basketball game about the bombings; the moment the survivors were introduced was both powerful and emotional. I had gone with the intention of running a PB in one of the world’s most historic marathons but around halfway I knew this wasn’t going to happen. It was too hot and I was already struggling with my pace so I just tried to enjoy the whole occasion and get to the finish. Not my quickest marathon or my favourite course, but the one I am proudest to have run. I felt truly humbled that I was able to race.

Boston was the completion of my original ambition – five majors. But it felt as if there was unfinished business: was Tokyo either achievable or affordable? During 2015, while I pondered the Tokyo dilemma, I ran  London (again) and Paris within two weeks of each other. No new PB: maybe age was starting to catch up with me. Definitely no more ridiculous sub-three hour dreams.

However, I knew my quest to become a marathon major six-star finisher would mean having to make the long trip east and so in February 2016 I travelled out to the Tokyo marathon. And what an experience and way to fulfil my ambition. The sights, sounds, culture, people, race and beer of this faraway land created the trip of a lifetime. Injury, and the GPS on my watch not locking on until halfway round meant the race itself felt more like a chore rather than a thrilling climax to my goal. But as I neared the finish I managed lots of exhausted smiles for the cameras and felt a huge sense of elation at finally completing my marathon mission. This running journey has been incredible and shows no signs of ending; no doubt they will add a seventh major at some point in time…

What has been the best marathon?

The best one is the next one.